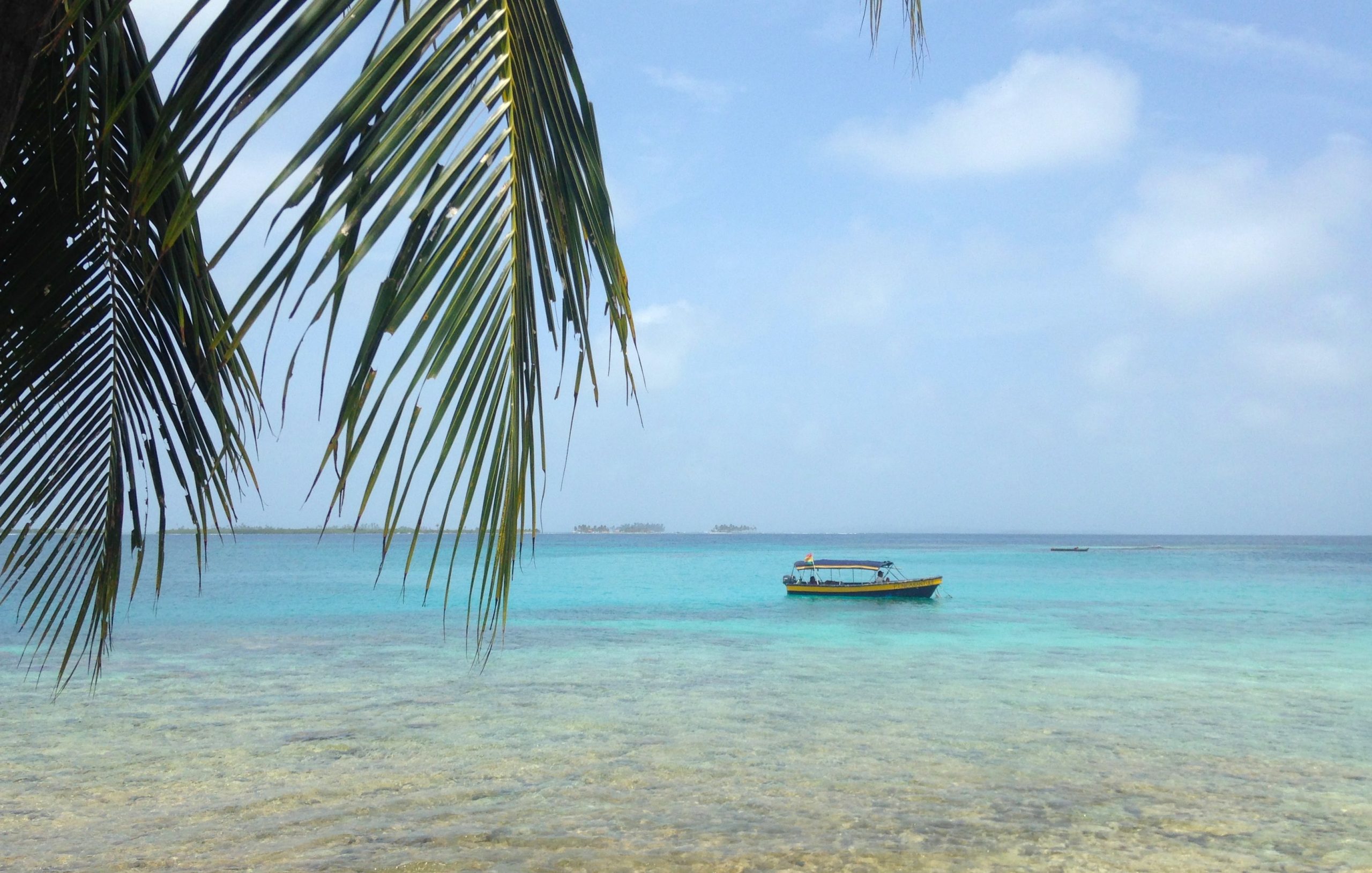 Allow me to introduce you to the set of your next travel fantasy. One for every day of the year, San Blas is an archipelago of 365 breath-taking islands in the northwest of Panama, which are inhabited by the Indian Kuna people.

For a few days this summer, I experienced the splendour of the islands courtesy of San Blas Adventures. From the old town of Panama City, we were taken by jeep to Carti and then greeted by our friendly Kuna guide Germain who wasted no time ploughing us with Abuelo rum as we made our way to the island we were to lodge at. 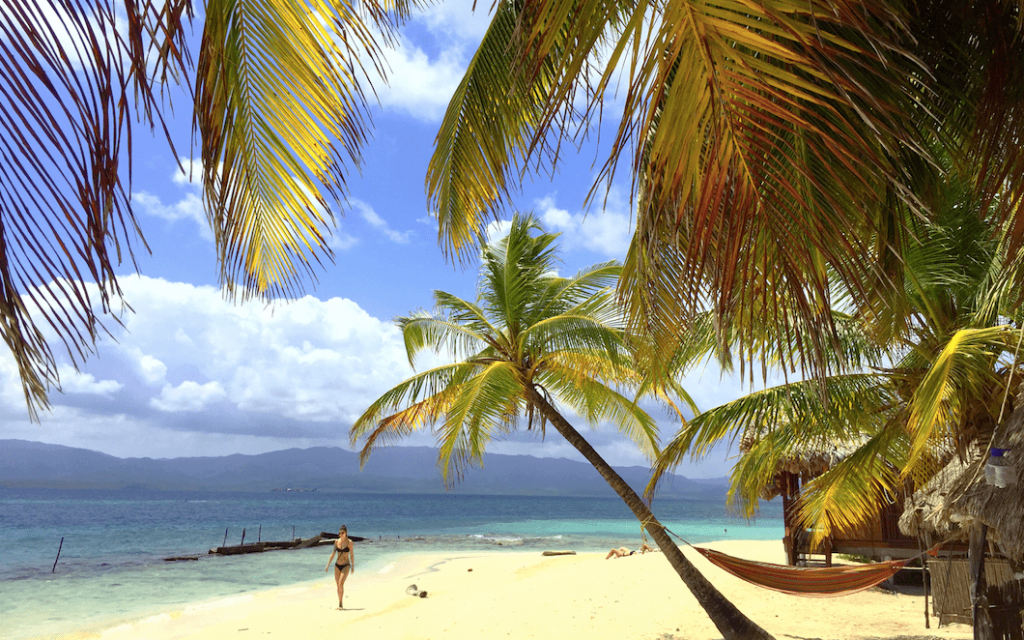 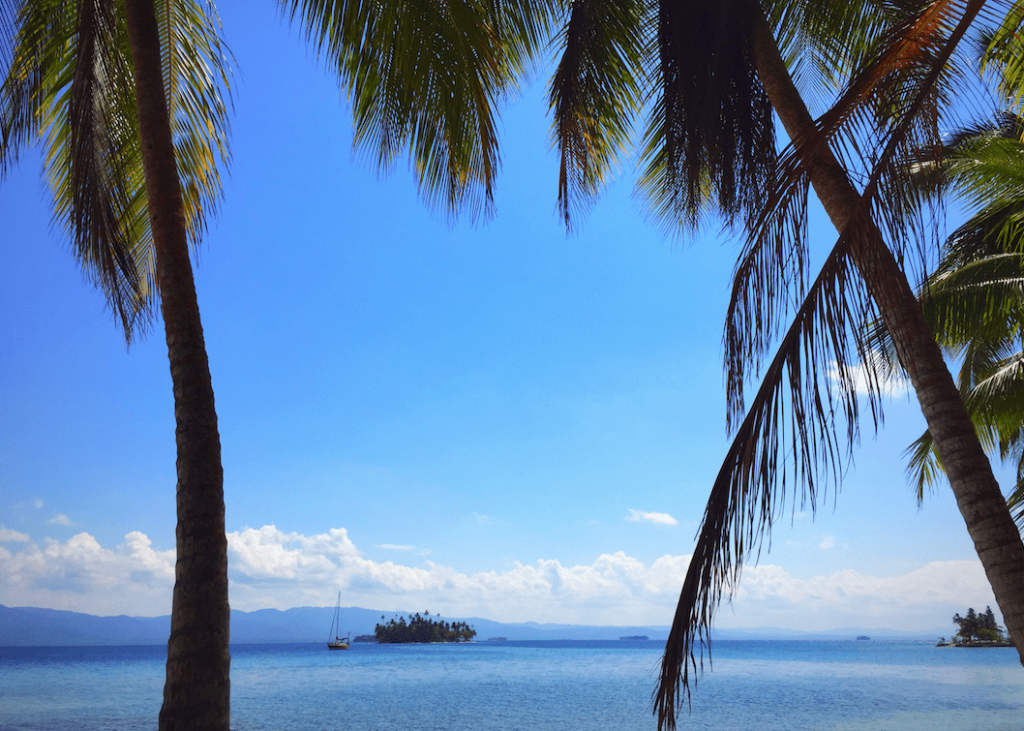 Our first day consisted of snorkelling and beach volleyball on Isla Perro (Dog Island), which is heralded as one of the world’s best snorkelling spots – with very good reason. Right off the main beach is a sunken ship, which is home to countless colourful fish, lobsters, coral, sea anemones and much more.

Next on the agenda was a scrumptious seafood BBQ at Isla Elefante (Elephant Island), one of the few islands with a restaurant. Freshly caught lobster, rice, patacones, coconut drinks and (more Abuelo rum) were on the menu as the restaurant turned into a mini disco. The girls got up and danced to Enrique Iglesias’ Bailando as the local Kuna women looked on admiring our half-soaked garments and smiling at us. 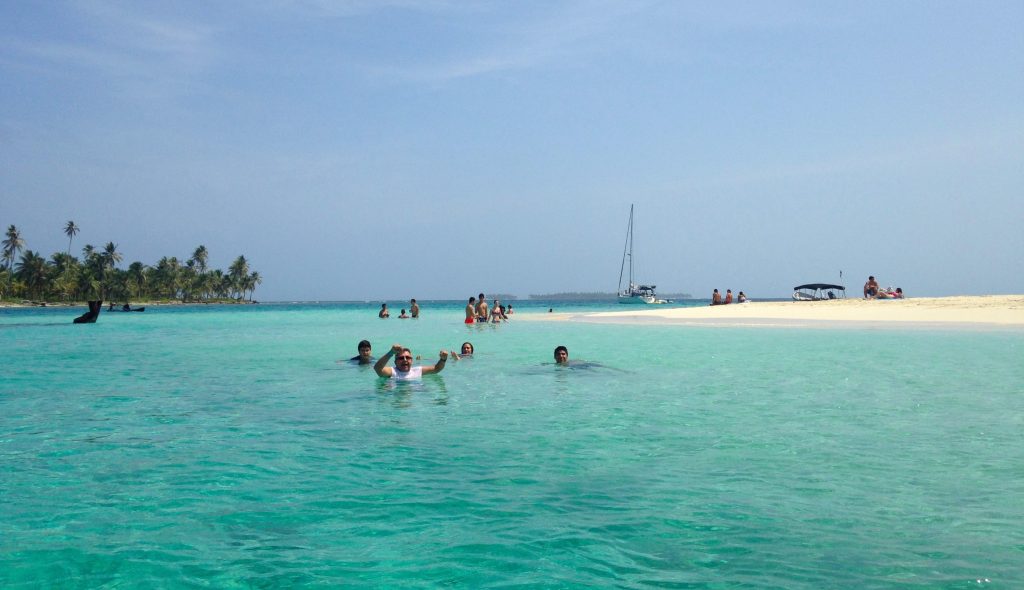 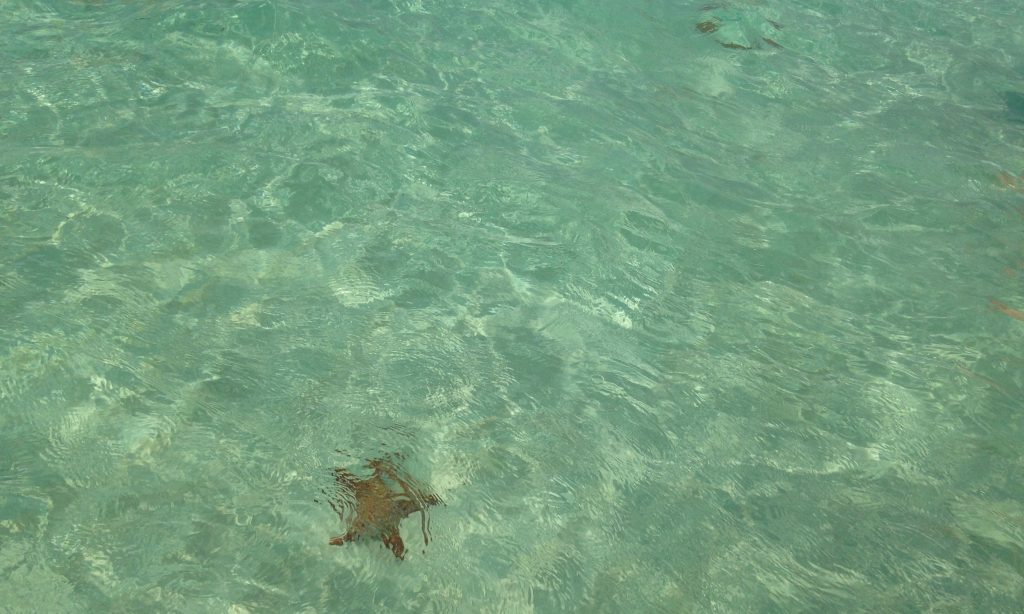 As the sun set on our festivities, we were taken to the island, which would be our home for the next few days: Isla Iguana. As our boat pulled up to the shore, all that could be heard was a chorus of pleased exclamations. San Blas’ beauty really does call for a reality check. You just simply won’t believe your eyes.

At the San Blas islands, the sea is largely visible from any single spot. What awaits you at this earthly paradise is perfectly powdery white sand and warm, clear emerald blue waters, the kind which only exists in your wildest dreams. 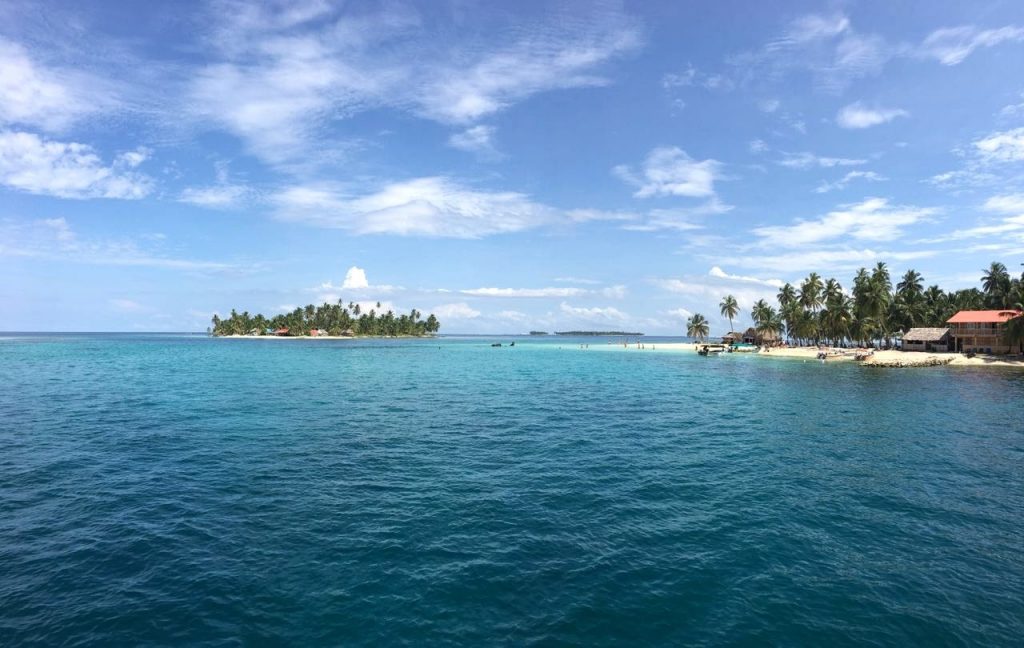 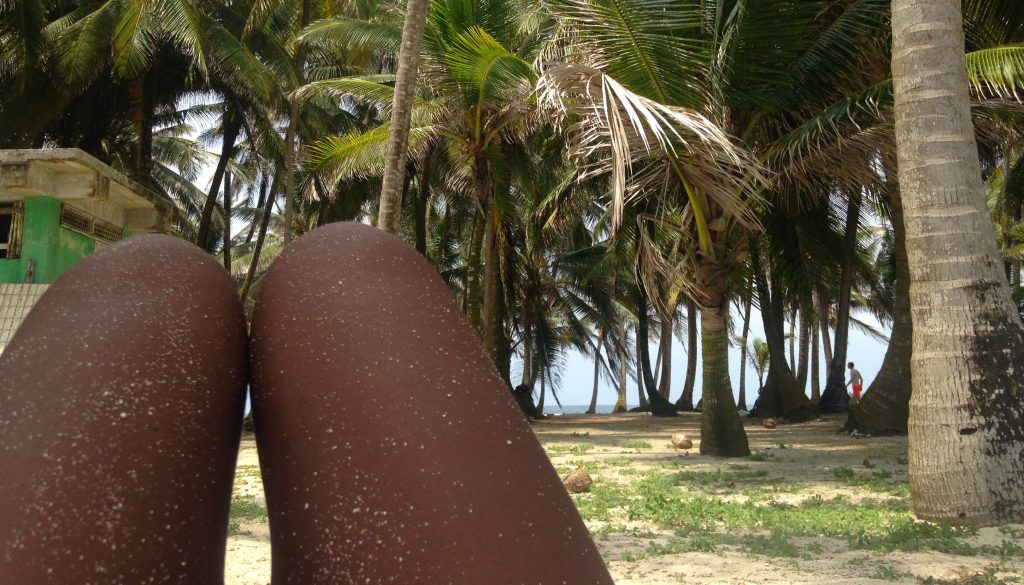 Our boat pulled up and Germain showed us to our huts. We had been forewarned that our stay would be rustic, to say the least, but we certainly didn’t mind. A generator would only provide electricity on our island from 6 pm to 1 am and we would also have to forgo fresh running water, but who cared? This was a rare opportunity to reconnect with nature and in a setting as handsome as this, who were we to complain? 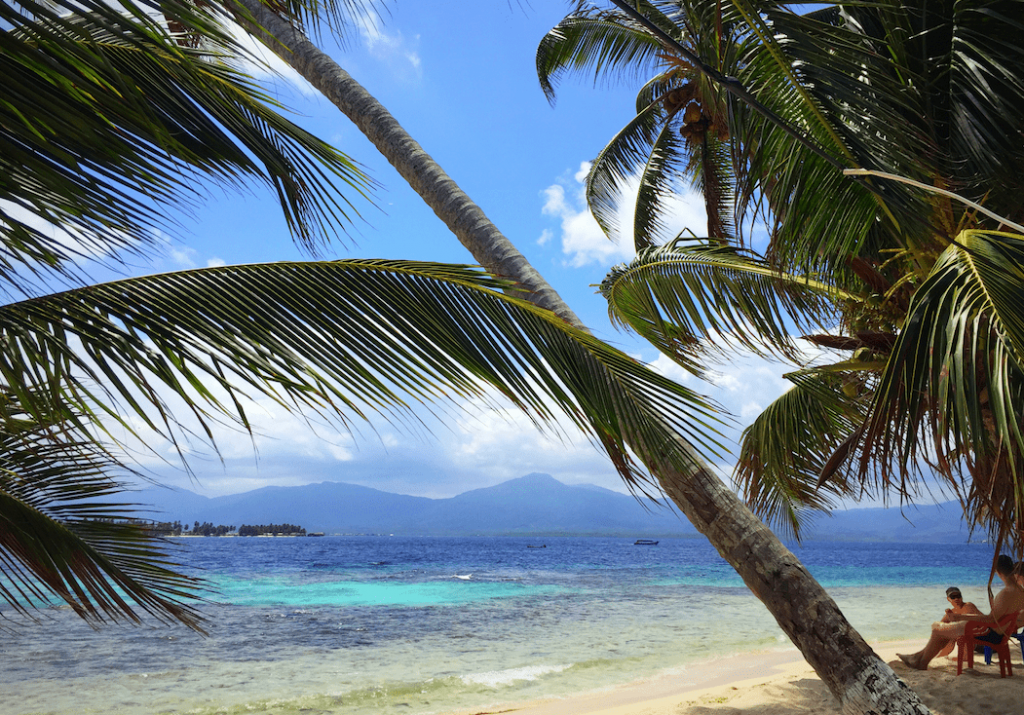 Each morning we were given a hearty breakfast at Isla Iguana’s small restaurant. Here we got to know three flamboyantly extravagant Kuna men who would prepare our fresh fish and dance around our tables. One of them was Rolly, who would put on a catwalk show and encourage us all to join in on his rendition of Daddy Yankee’s Gasolina.

After breakfast on our second day, the island hopping continued and Germain took us to Isla Perro Grande (Big Dog island) for fresh lobster and lunch with other tour groups under the palm trees. Names exchanged and sufficiently satisfied, we were all taken out for one of the most unique experiences of my life: a party right in the middle of the sea.

Our three boats pulled up to a quiet spot in the centre of the earth, and all that could be seen for miles was endless bliss. We got out of the boats to shallow waters no deeper than our knees, perplexed and wondering what we had been brought here for when suddenly, the boat’s sound systems started blasting reggaeton music and Germain appeared once again brandishing his rum.

Standing right in the middle of the Caribbean Sea, we were having a party. The weather was perfect, the water was warm, and I can honestly pinpoint this as one of the most beautiful I’ve been fortunate enough to witness. 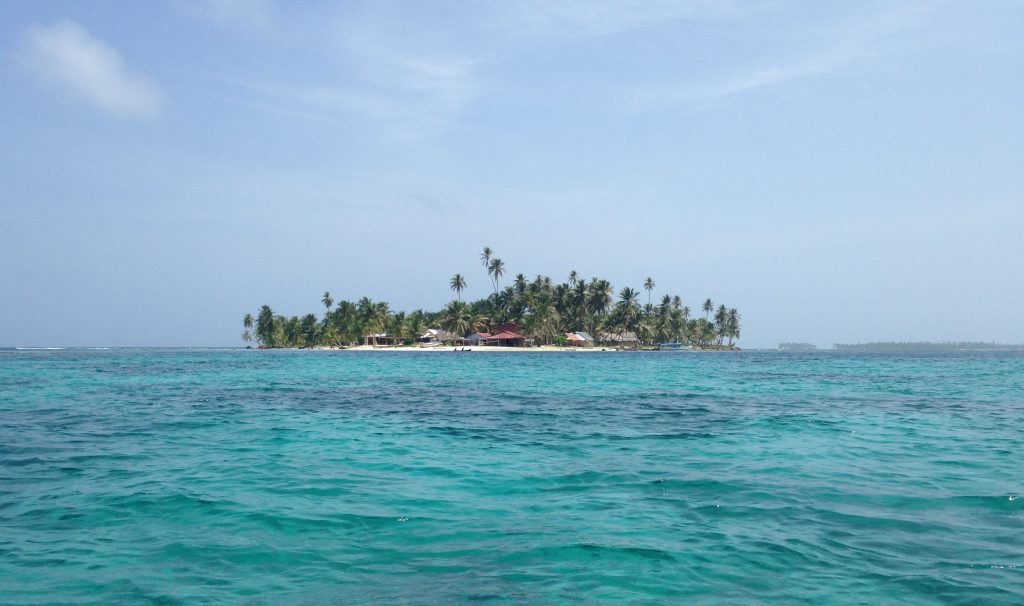 San Blas brings a new meaning to island hopping – you can literally swim from islet to islet, taking in the friendly marine life along the way. The waters here are so pristine that snorkel gear is essentially optional. San Blas, however, doesn’t solely appeal to beach lovers. Those desperately in search of an authentic connection to a unique culture can come here to perceive the richness of the Kuna people, a group that has remained relatively unaffected by Western advances for hundreds of years.

The Kuna Indians of Panama have resided in the San Blas islands since the nineteenth century and have preserved many of their distinct traditions and identifiers including the bright ‘molas’, their traditional dress, and Wini string beaded jewellery worn by women.

The last day of our paradise escape took us to the capital of this indigenous territory, El Porvenir, home to around 1000 Kunas. Here we truly got to see their school, hospital and forms of recreation. The locals were exceptionally friendly and buying souvenirs here was also a fraction of the price one may come across in Panama City. As we walked along the sand-paved paths, we pondered over what life would actually look like without all the frills we’ve become so accustomed to. 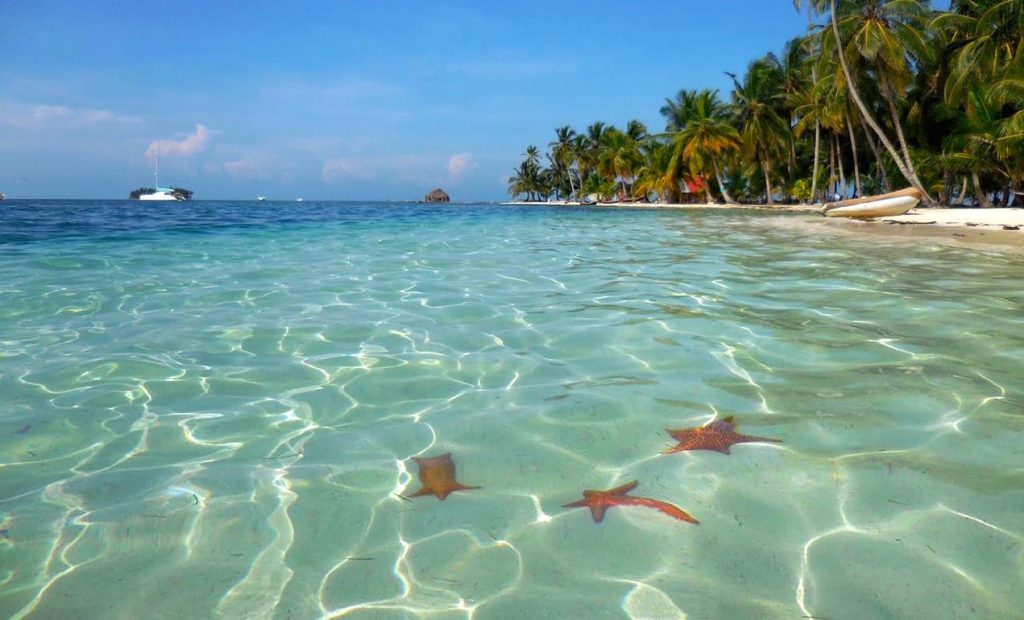 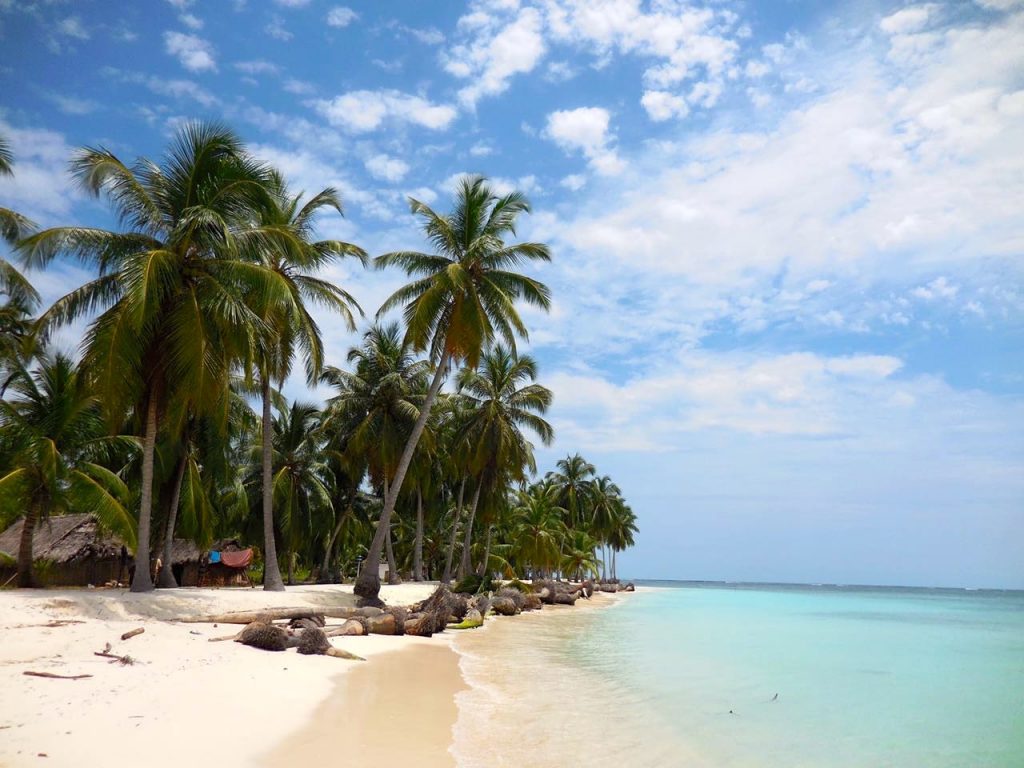 The fresh air, the silence (and the distinct lack of WI-FI), gave us permission to switch off and just be without having to be productive or engaged in any kind of activity. In San Blas, hard-core relaxation is your sole goal. You have no choice but to: there are no urgent emails to respond to and your cell phone most certainly won’t work. 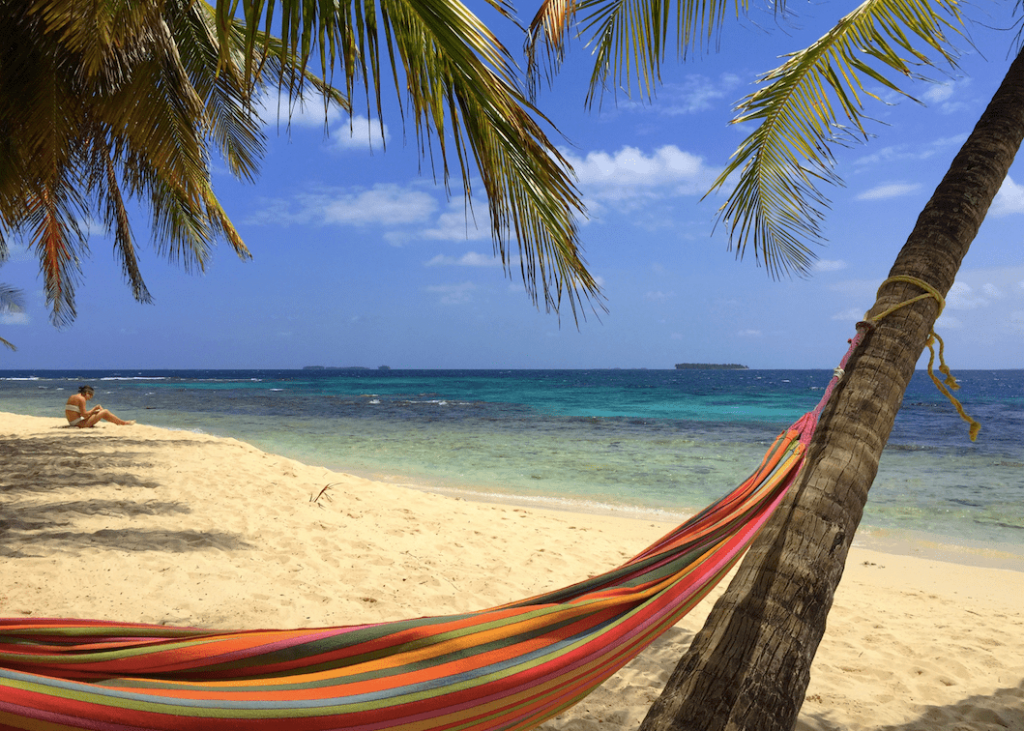 The pastimes here are stargazing, lying in hammocks, admiring sunsets, listening to the waves, pinching yourself and never wanting to go home. The San Blas Islands are perfect to get away from the world. Remember to travel light, however, as you won’t get far here without hopping on a water taxi.

It was hard waving goodbye to Rolly, Germain and his copious amounts of fine Panamanian rum as well as being awoken by the soothing sound of tropical waves, but I’m almost certain I will be back there sooner rather than later. San Blas is absolutely a must-see if true paradise happens to be your cup of tea. 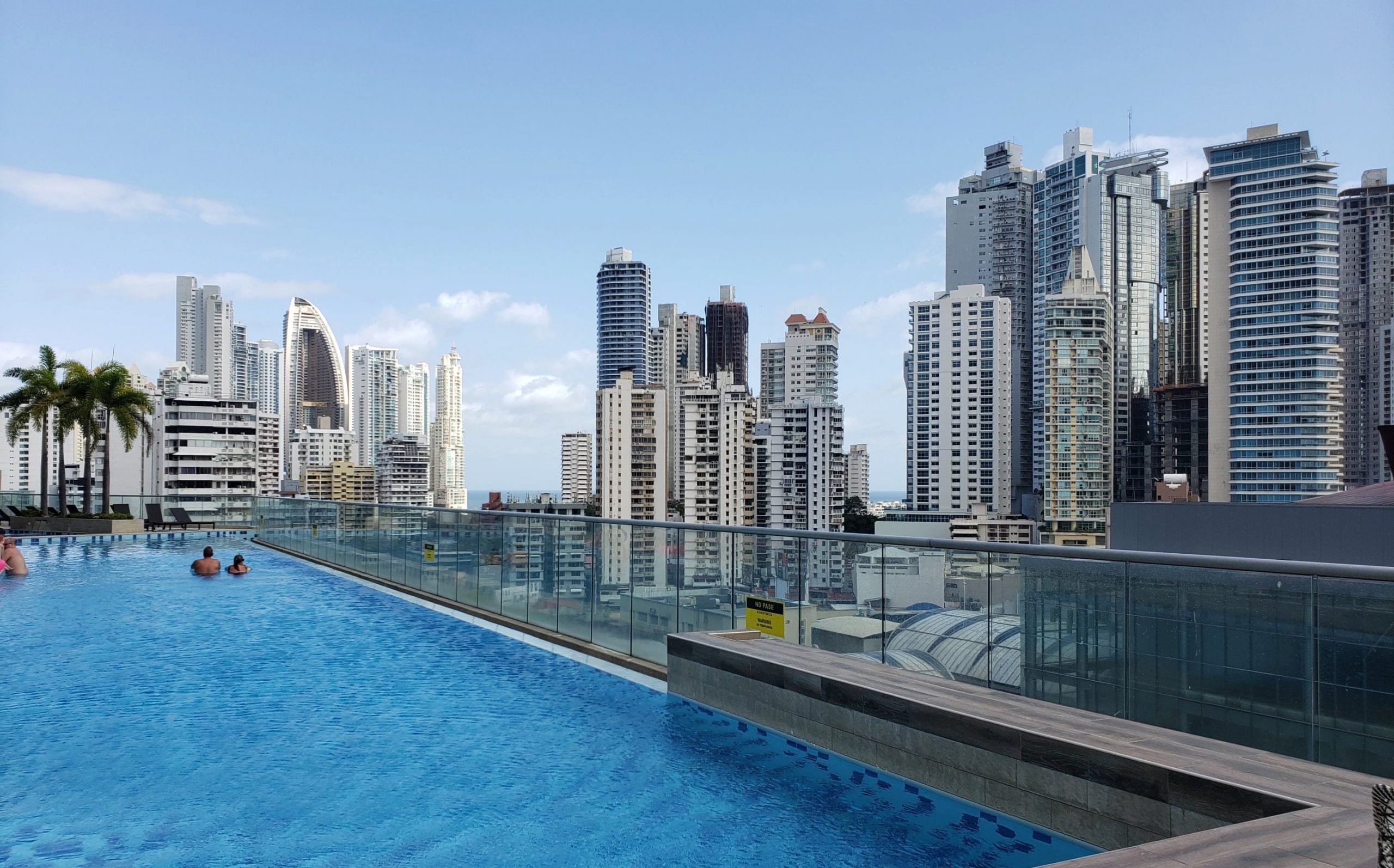 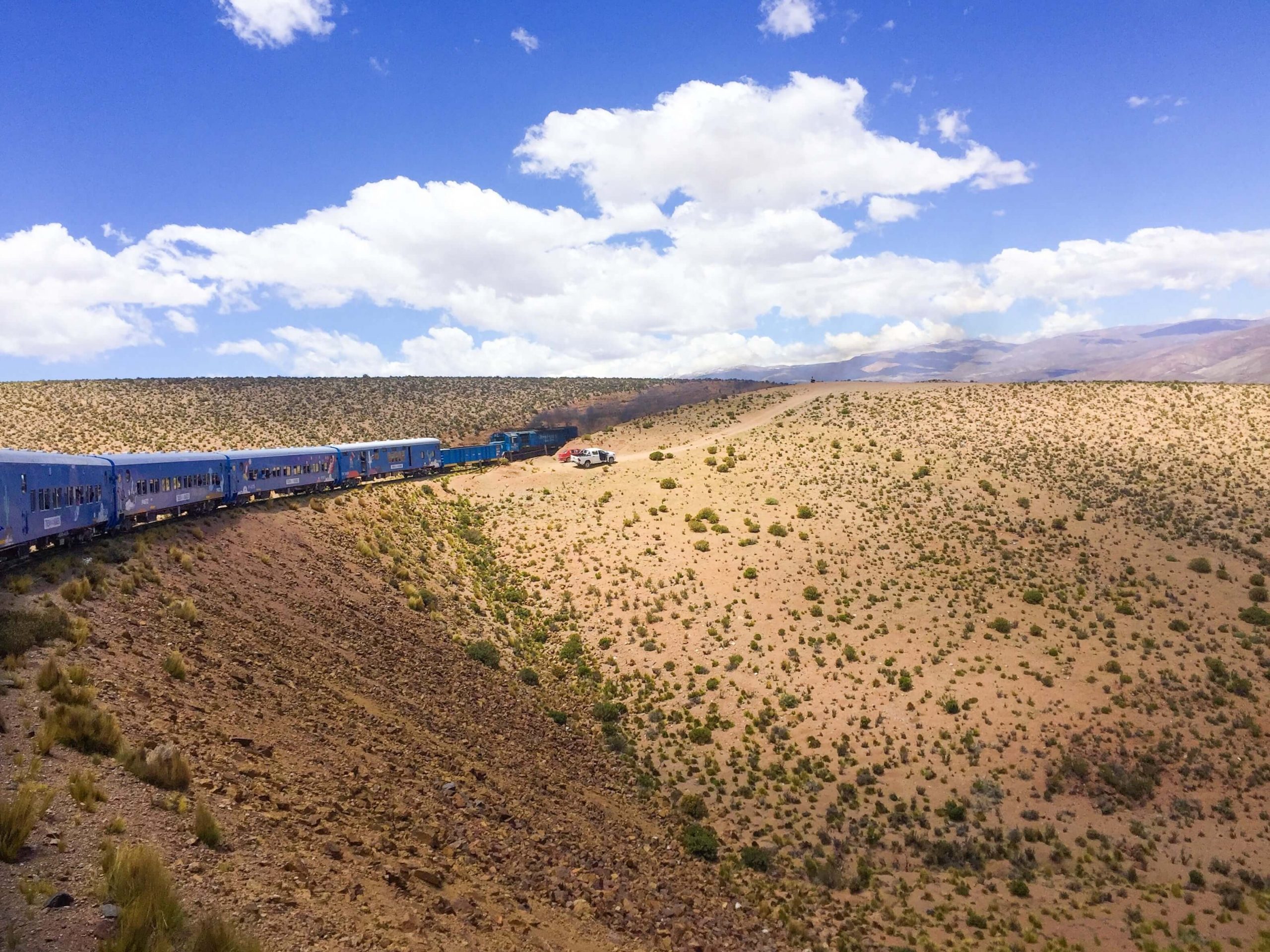 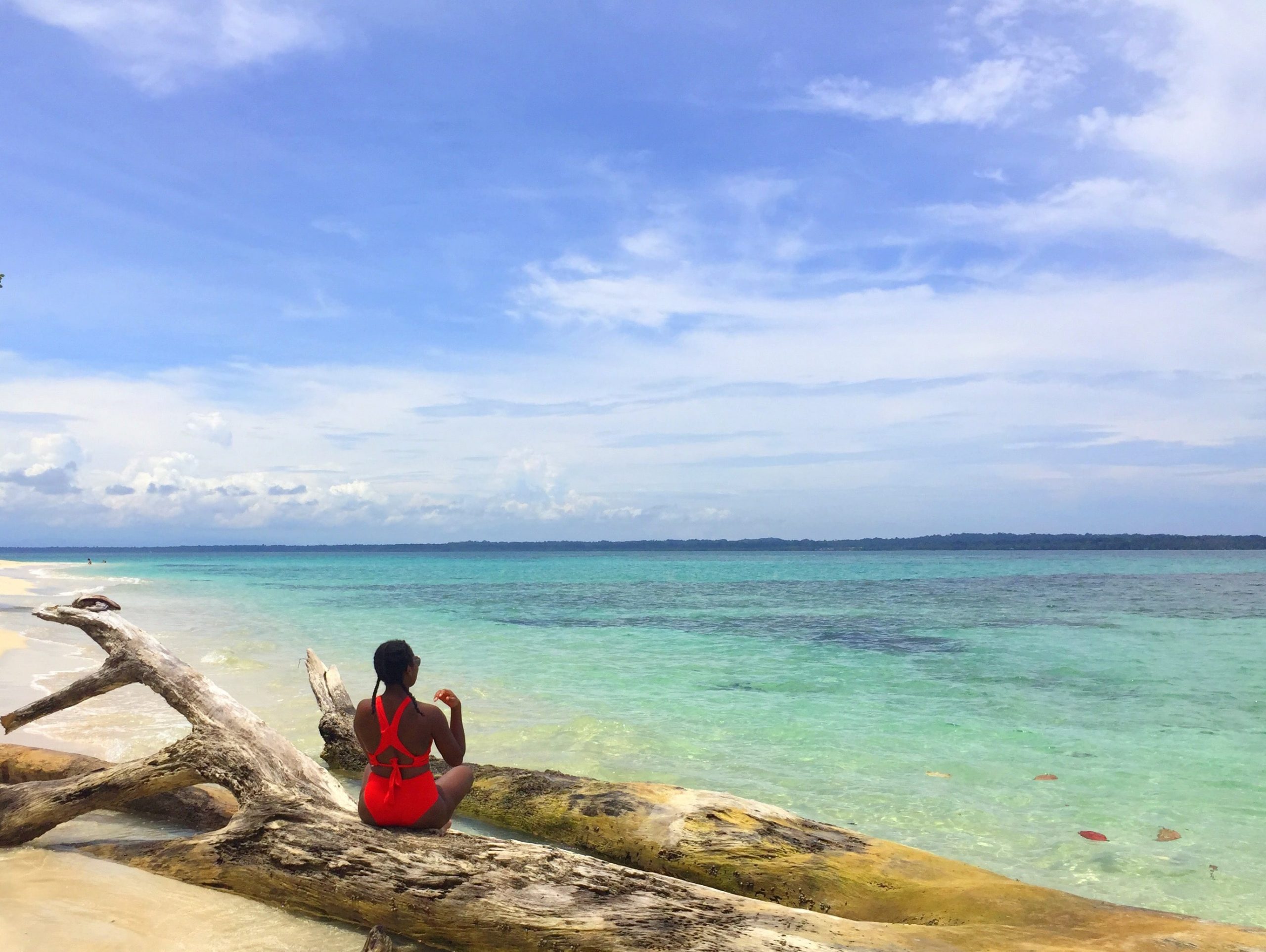